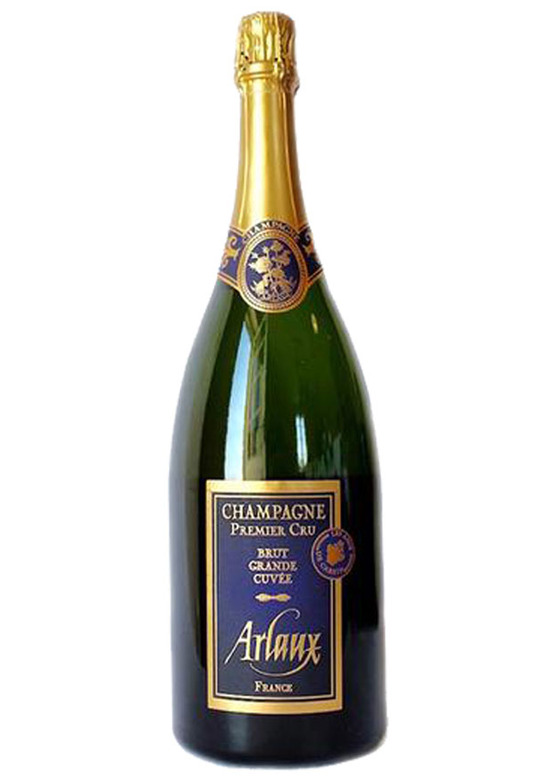 We have been trying to get the team at Arlaux Champagne to let us have some magnums for several months now but they are really rare. Most of the production of Arlaux goes to Michelin-starred restaurants in France and theres not much call for magnums in the restaurant trade.

In magnums it is even better than in bottles as it matures more slowly and has more depth of flavour. When is it drinkable? Now, as it has been in bottle already for around 5 years. How long will it last? Another 10 years easily and probably more.

Arlaux Premier Cru champagne as many of you know is the finest single grower champagne on the market. Arlauxs vineyards are all premier cru on the Montagne de Reims and at Robert Parker's famous tasting of non-vintage Champagne, Arlaux knocked the socks off the competition and came first ahead of all the much more expensive Grand Marques including Bollinger and Taittinger.

What do the critics say?
"I'm acutely aware that we rarely offer champagne in these pages, other than the occasional treat from our beloved Pol Roger (the Speccie house pour), largely because I've never found one thats good enough or well-priced enough. Well, crikey, thanks to Esme Johnstone of fromvineyardsdirect I've finally now found one. The Arlaux Champagne Premier Cru, Brut Grande Cuvée NV fair knocked my socks off. Produced by the Arlaux family from insecticide-free Premier Cru vineyards in the Montagne de Reims, it's first-rate fizz and no mistake. And don't just take my word for it. It's gloriously honeyed, toasty notes and finest of fine mousses also caught the eye of Robert Parker, no less, who recently placed it top of a blind tasting of 50 non-vintage champagnes. Oh, and by the way, Bollinger was second and Taittinger third, both of which cost a heck of a lot more than this does."
Jonathan Ray, The Spectator